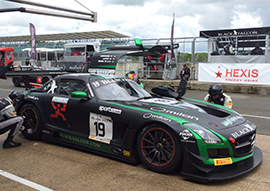 Fosroc International shows it support to its Saudi Arabia partners by sponsoring the Black Falcon team during the 2014 Blancpain Endurance Series race at Silverstone.

Racing driver, Abdulaziz Turki AlFaisal and his team competed in the second race in the Blancpain Endurance Championship at Silverstone on the 25th May.

Having got off to a positive start by leading the way in the Pre-Qualifying Practice, the team missed out of top 10 finish but can still walk away with some positives, the most notable of which is the highly improved Qualifying and Race performance.

More recently, the team picked up an inaugural 4 points with a top ten finish at the Paul Ricard circuit in France in July