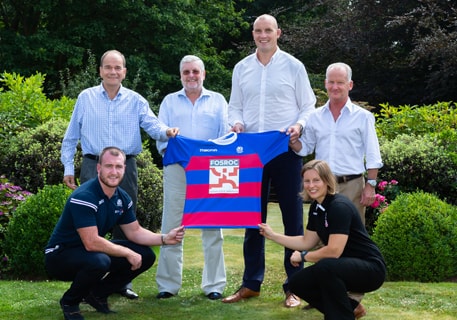 Fosroc International are pleased to announce the sponsorship of the Scottish Rugby Academy.

Fosroc will be the naming sponsor of the Scottish Rugby Academy from the 26th July 2018 alongside having a branding presence on the shirts of Scotland U18 and U20 over the course of the three-year deal.

The new partnership is the result of an on-going relationship between Scottish Rugby and Fosroc, which was initially formed through the Scotland Business Club, which provides networking opportunities around national team fixtures in Scotland and abroad.

Dr Jim Hay, the non-exec Chairman of Fosroc, said: “As a proud Scotsman I have followed the Scotland national team for many years and I’m now thrilled Fosroc will help support future generations of rugby players through our involvement with the Fosroc Scottish Rugby Academy and the Scotland U18 and U20 programmes.

“The academy has proven over the last few years how important it is to the future of Scottish rugby and through this partnership we are confident it will continue to produce exciting talent.

“Carrying on from the work previously done, the Fosroc Scottish Rugby Academy will also have a focus on the players’ careers, both on and off the pitch, and we look forward to working closely with the group to help assist their off-field development.”

Scottish Rugby Business Development Manager, Al Kellock, who oversees the Scotland Business Club said: "The academy is playing a huge part in the positive progress Scottish Rugby is making and I am delighted that Fosroc have partnered with us to continue that success.