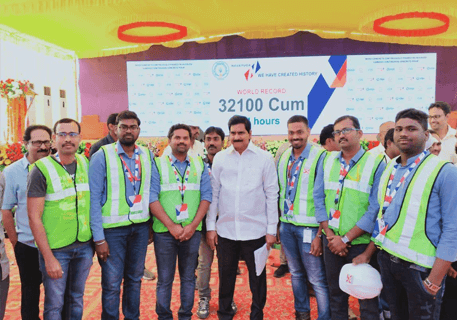 On Monday 14th January, the Polavaram Dam project in Andhra Pradesh entered the Guinness Book of World Records for pouring 32,315m3 of concrete in 24-hour period. The Union Government of India has accorded the dam national project status.

The dam construction involves building a 1.5 m-thick concrete diaphragm wall below the riverbed under the earth dam, from 40 to 120 m, which is the first of its kind in India. The purpose of the diaphragm wall is to secure the stability of the riverbed to withstand the water pressure on the dam. The project will constitute an earth-cum-rock-fill dam of 2,310 meters (7,580 ft.) n length, with a spillway of 907 meters (2,976 ft.) and containing 44 vents to enable a discharge of 3,600,000 cu ft./s (100,000 m3/s) of water.

The project started in 2017 with the construction of the first spillway and then the earthen DAM. The total volume of concrete used to construct the spillway dam and spillway channel is 32 lakh cubic meter.

After gaining approval for their customised admixture formulation, Conplast SP430, Fosroc was invited to be one of the key associates and official supplier of admixture for the project. The Fosroc sales team in the Andhra Pradesh region played an important role by sending the sample along with other ingredients to the Ministry of Water resources in New Delhi for testing and approval. It took approximately six months to obtain the approval of the product, and the project started once this was granted.

Navayuga Engineering Co Ltd carried out the spillway channel construction using panels of 10M X 10M X 1M, each panel requires 100m3 of concrete to construct it. Approximately 18,000 m3 of concrete was being poured daily to complete the spillway channel construction. Ten batching plants erected on site with a capacity range of 3m3 to 1.5m3 per batch mix, ensured that the concrete requirements of the project were met.

The world record attempt by Navayuga Engineering Co. Ltd started on Sunday 6th January at 8 am and ended on the following morning at 8 am. Fosroc, as the official supplier of admixture for the event, dispatched 100MT of Conplast SP430 on time to help set the world record.

It was a proud moment in the history for Fosroc achieving such a feat, using only Fosroc's Conplast SP430 admixture solution to set a world record. A key aspect of the project was the collaboration of various Fosroc teams working together around the clock to support the concrete pouring. Moreover, this was further highlighted and appreciated by everyone involved in the project. To remember the occasion a  memento was awarded to the Fosroc team by the Honourable Chief Minister of Andhra Pradesh Sri N. Chandrababu Naidu.