Leaders in concrete admixtures – products to modify and improve the properties of fresh and hardened concrete or mortar.

Berger Fosroc are the pioneers in providing a range of concrete admixtures, liquid additive, added to concrete to enhance the quality and properties of concrete in both the plastic and hardened stages, which eventually help in achieving the desired durability in concrete structures. Our products comply with IS 9103, IS 2645, ASTM C 494 BSEN 934-2, BS 5057.

On Monday 14th January 2019, the Polavaram Dam project in Andhra Pradesh entered the Guinness Book of World Records for pouring 32,315m3 of concrete in 24-hour period. Fosroc India team, as the official supplier of admixture for the event, dispatched 100MT of Conplast SP430 on time to help set the world record. View the Polavaram Dam project video.

Water is the first and foremost consumed substance in the world. Construction industry consumes the highest water for production of concrete and for curing. Concrete is the second most used commodity after water. Berger Fosroc concrete admixtures can reduce the use of water up to 40% and at the same time improves the properties of concrete and enhance durability.
Watch our Fosroc Water Video

High early strength and curing efficiency are the most important requirements for the precast industry apart from slump retention.

Pavement quality concrete in road laying require high compaction designed specifically for achieving the desired flexural strength. It is essential that the concrete is able to support itself in the shape moulded for PQC applications with very low slump.

For highly congested reinforcement in columns, beams and rafts, where regular concrete placement is not possible, free-flow, self-compacting concrete (SCC) is designed so that there is no need of any vibrators. Special admixtures for SCC prevent any segregation or bleeding although fine contents which occur high during concreting.

Concrete poured in shear walls and retaining walls must have high slump retention while being cohesive to give a firm finish.

Concrete pours in dams needs low slump while effectively avoiding cold joints between each pour. For such specific needs, our air entraining and retarding plasticisers are ideal.

Concrete for precast railway sleepers, paver blocks, masonry bricks, and aerated concrete blocks, have different mix designs and workability requirements. Our range of admixtures are designed to meet the various requirements of these industries.

The New Austrian Tunnel Method (NATM) uses the geological stress of the surrounding mass to stabilize the tunnel itself. The excavation is immediately protected with a layer of sprayed concrete (wet) with accelerators that enable quick setting properties to provide an Initial Setting Time (IST) as low as 5 minutes. Berger Fosroc’s range of accelerating admixtures are used for fast setting of concrete and to attain the required slump and pumpability.

An iconic high-rise mixed use building in Worli, Mumbai. 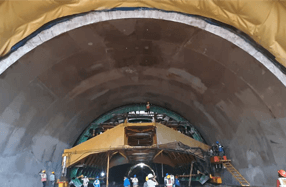 A road project for Churhat Bypass, located 55 km away from Rewa in Madhya... 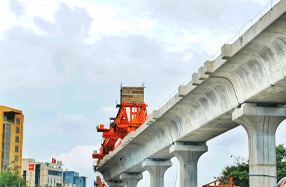 The project consists of the construction of a metro rail in Pune.